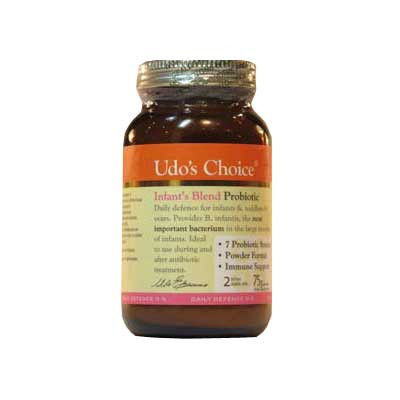 Formulated with a viable count of specially chosen microflora strains especially beneficial for an infant's healthy intestinal flora. The bifidomicroflora, including B. infantis, should represent the largest population of beneficial microflora in babies, whose immune defences are not yet fully working. The specific strains used in Udo's Choice Infant's Blend have been specially chosen for their value to infant health. This powder format has been designed to be added to formula or liquid after it has been heated.

Guarantees two billion viable organisms of beneficial microflora* that are absolutely essential for proper digestion, strong immune function and over-all health. (*at time of manufacture)
Formulated to include the bifidomicroflora, including B.infantis, B. bifidum and B.breve which should represent the largest population of beneficial microflora in babies.
Is in powder format designed to be added to milk or water after it has been heated.

Microbiotics are the beneficial, friendly microflora that occur throughout the digestive tract. Poor eating habits, chlorinated drinking water, stress and disease and the use of antibiotics in food production as well as in medical treatments can wreak havoc in the gastrointestinal tract by destroying good microflora and allowing undesirable microflora to multiply.

Why do we need Microbiotics?

When the ratio of good microflora to bad is lowered, problems can arise such as excessive gas, bloating, intestinal toxicity, constipation and poor absorption of nutrients. Whilst it is true that non-beneficial microflora are naturally occurring in the intestinal tract problems begin when their growth goes unchecked. Microbiotics play an especially important role in keeping in check the pathogenic microflora that cause disease.

A healthy lower intestine should contain at least 85% friendly microflora to prevent the over colonisation of disease causing micro organisms like E.coli and Salmonella.

Infants' immune defences are not yet fully working . Babies pick up friendly microflora from their mothers during their passage through a clean and healthy birth canal. Studies show that B. infantis was found in approximately 60% of full-term newborns who were born vaginally and only 9% of babies born by Caesarean Section. Formula fed babies also have significant differences from breastfed babies in the composition of their gut microflora because the heat used to pasteurise formula kills all microflora.

Each gram of powder is guaranteed to contain not less than 2 billion total viable cells (at time of manufacture) of:

Refrigeration ensures maximum potency & stability. Udo's Choice Infant's Blend microbiotics can be left unrefrigerated for short periods of time and may be frozen.

HIGH TWO Vitamin B2 with B-Complex

HIGH TWELVE Vitamin B12 with B Complex

HIGH SIX Vitamin B6 with B complex